“… they were all together in one place … all of them were filled with the Holy Spirit.” 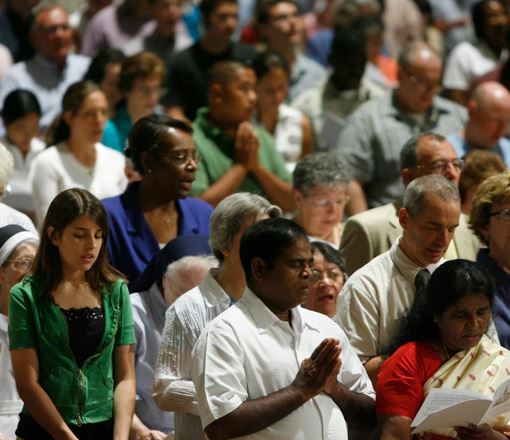 The message of Pentecost of one of radical Christian inclusion. Everyone was filled with the Spirit and, onlookers in the temple courts and in the streets who had come to Jerusalem from across the Roman Empire heard about God in a way they could all understand.

In a multi- cultural empire the first Christians reached out to everyone they encountered. Looking at the names we find in the New Testament, there were Greeks, Romans, Jews and people from Africa in the first house churches. There were fishermen and tax collectors, merchants and labourers – they believed that anyone (all) who called on God would be saved, irrespective of their background or their personal circumstances (Acts 2: 21, 38, 39).

Human beings generally prefer order to chaos which is why we arrange the books on our shelves and the dates in our diaries. It’s a good habit to get into but a bad one to apply in circumstances where drawing a line, making a choice or pigeon holing a person becomes more important than the event or the person themselves.

As recent events in Minneapolis have demonstrated, it is when we see others as being of less worth or value than ourselves that the real problems can be found. Those views reflect deep seated prejudices that have caused hurt and reinforced exclusion for generations. Drawing lines around or between people inevitably means that some are “in” and others “out.”

The fact that others may define us by the way we speak, on the basis of the words we use for our evening meal, the colour of our skin or the place where we were born [*], is totally at odds with the Christian Gospel where all are welcomed and valued. [* Note: These are a few examples; there are many more instances of prejudice observable in daily life].

Confronting the evils of discrimination and entitlement can lead – especially where there seems to be no move to resolve injustices meted out to others – to more radical action than the peaceful protest favoured by many. We can look outside in at such escalations as toppling the statue of Edward Colston but perhaps not appreciate the extent of the pain and frustration that drives people to follow such a course of action. Perhaps, like Keir Starmer has said, we feel that something should have been done sooner rather than leave the decision to crowd justice in the heat of the moment when frustrations beyond racial discrimination are boiling over.

Discrimination, partiality and assumed entitlement are wrong whenever and wherever they occur. God sees us all just as we are (see Psalm 139): when we see people in any other way, then we are judging them and putting ourselves on a (often self-created and self-determined) pedestal.

When we are committed to living out the values of the Kingdom of God we so easily and quickly profess with the words of the disciples’ prayer (Our Father), then we will stand out for justice, seeking mercy and walking humbly with God. We’ll also stand with the oppressed, the excluded and the broken. We’ll love the so-called unlovely and call the world around us to account with the voice of the prophet who can see the signs of the times.

I cannot begin to understand the hurt experienced and rejection felt by others but I can recognise the life God calls me to lead which seeks to draw everyone to Him. I – you – can present a different way, one of peace but one that does not allow exclusion to remain unquestioned. At this time of significant change in the life of our nation let’s recognise that all are loved by God, since it was for us all that Christ died on the cross.