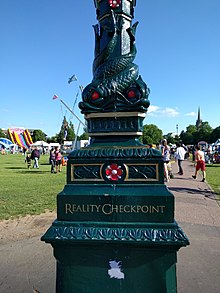 In late August 2005 it seemed as if half the population – and not just sport overs – crowded round a TV set as the England Cricket Team fought to win back the Ashes.

The celebrations which followed the final game lasted well into the next week, culminating in an open top bus parade around Central London and meetings with the Queen and Prime Minister.

Sadly, the euphoria which followed that victory was rather short lived, as the following test series in India and Pakistan were both lost by large margins.

As with sport (whatever your favourite game might be), so with everyday living. Each of us has moments of triumph where we feel invincible and on top of the world. We’ll also, at some time or another, have to confront our deepest fears, face pain we can hardly bear or experience deep distress at losing someone we love. As so often happens, the euphoria of victory is so often followed by the darkness of defeat.

A few years ago, Rudyard Kipling’s poem “If” was voted the nation’s favourite. It contains some immortal lines which speak of these very things – success and failure. One verse that I find particularly challenging (because it speaks of our attitude in the way we might live), is this:

As I write these words between Easter and Pentecost, I am struck again by the meaning and the reality of Easter. Unlike the England Cricket Team this is not a riches to rags story – in, fact quite the reverse.

Easter is not the greatest escape of all time but the greatest victory coming out of what appeared to be the deepest defeat. They thought it was all over, that the new “movement” was finished almost as soon as it had begun, with the death of its leader. But history proves, as the events of that first Easter morning demonstrate, that in Jesus’ victory over death, we have a triumph in which we can share and celebrate.

Holding onto triumph enables us to see a bigger picture when the darkness of defeat presses in closely. As a new dawn begins and restrictions are being eased, we look to the victory of the cross to determine how we live. We are free to say that our faith matters and to show that we are committed to building God’s Kingdom.